By Sam Mcevoy For Mailonline

Floyd Mayweather has announced he will fight Geordie Shore star Aaron Chalmers at the O2 Arena in his first-ever UK-based fight next month.

It comes days after Mayweather announced he would be facing Liam Harrison for the event, only for the kickboxing icon to pull out just six hours later due to a knee injury.

But the 45-year-old has acted quickly to find a new opponent, with reality TV star Chalmers given the nod to take on the boxing great.

Mayweather will face reality TV star Chalmers (right), who has a background in MMA

Promoting the fight on social media, Mayweather wrote alongside its poster: ‘London. This will be my first time showcasing my talent live on Feb. 25th. I want the whole UK at the O2 Arena.’

A second message read: ‘Different face, different name, same results. #London we are still rocking and rolling on Feb. 25th at the O2 Arena. Tickets will be on sale soon. Stay tuned!!’

Mayweather has not fought in a professional bout since 2017, but he has taken part in several exhibition fights against the likes of Logan Paul, Deji and Mikuru Asakura over recent years.

It comes days after Mayweather was due to fight Liam Harrison, who pulled out with injury

And now Chalmers will be next to try and pose a problem to ‘Money’, with 35-year-old hoping his background in MMA will help him when he face one of the all time greats.

Alongside starring in the hit reality TV series Geordie Shore and Ex on the Beach, Chalmers made his way into MMA with BAMMA in 2017 before becoming a Bellator star, where he won five of his seven professional fights before retiring from the sport in 2021.

Mayweather’s last fight in his official boxing career was in 2017, when he defeated MMA star Conor McGregor to extend his fighting record to 50-0, with 27 KOs.

He was best known during his career for his famous victories against fighters such as Ricky Hatton, Oscar de la Hoya and Manny Pacquiao among others.

He never fought outside the USA while he was a professional boxer, but suggested he would fight in England for the first time when discussing his exhibition tour earlier in January.

He had said: ‘In February we’re looking forward to coming here and putting on an exhibition for the fans in the UK, because I never had a chance to come over here and fight when I was actively boxing as a professional.

‘So hopefully in February I’ll come over and do an exhibition if it’s possible.’ 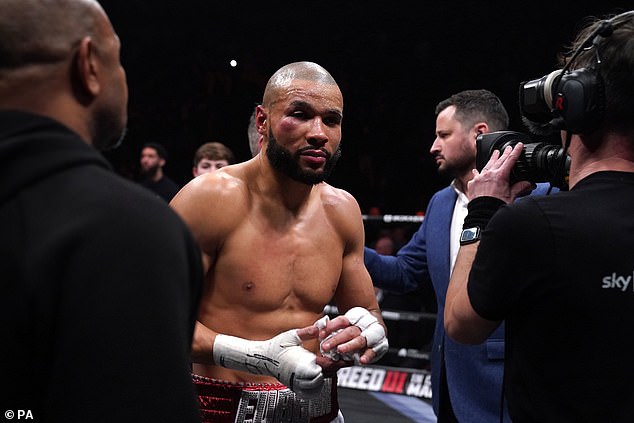